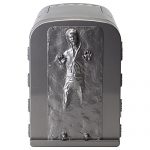 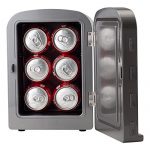 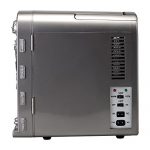 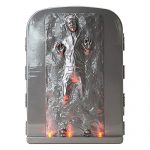 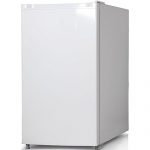 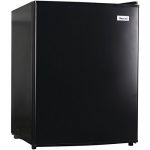 Product prices and availability are accurate as of the date/time indicated and are subject to change. Any price and availability information displayed on [relevant Amazon Site(s), as applicable] at the time of purchase will apply to the purchase of this product.

Han Solo has the fastest ship in the galaxy and is the best smuggler on this side of Tatooine. He becomes involved with the Rebels as he helps Luke Skywalker begin the battle for freedom from the Empire. At first he was only in it for the money but he soon fell in love with Princess Leia and took up the cause on his own. Made famous by Harrison Ford, Han solo is now an infamous character within the Star Wars galaxy for beginning as a reckless smuggler with sarcastic wit and then changing into a guy that won’t let his friends down. One of Han Solo’s most memorable moments is when he is frozen in a Carbonite block and hung on the wall of Jabba The Hutt’s wall as a trophy. The 4 liter mini fridge holds up to six cans of beverage and features this famous scene. Each style of fridge has a hot and cold function and a carry handle. Function *contents 1x R2D2 cooler, x1 mains power lead, x1 car 12v lead – powered by ac 110v or dc 12v electric supply. May The Force Be With You!
Officially Licensed Star Wars Han Solo in Carbonite 4 Liter Mini Fridge
Fridge also features Warming function if you’d like to heat your food!
3D Molded for Life Like Han Solo Appearance Exclusive from Seven Times Six
Power: Plugs into a standard US outlet or DC 12V car socket
Interior Capacity: 6 cans of 12oz soda or 4L/.14 cu. ft. Exterior measurement: 11.5″ high 7.5″ wide 11.5″ deep